Last time I came here I left the weekend with a sprained foot, so my first aim this weekend was to come home with no major injuries. It was also be forecast to be very wet all weekend so we drove on Friday to try and get an advantage over my competition who just did the two days.

On Friday I had really good pace in the wet comparable to the two leaders in the championship. The track also dried out for the final two sessions of the day so I managed to get a bit of dry practice which would come in helpful if it dried out on race day. I managed a best of 50.66s, which also was the quickest lap time out of everyone on track all day. We ran my race engine as it had just been for a rebuild to RPM Racing and we need to know it was back on song after being down on power for last few weeks.

It was even wetter than we expected on Saturday but surprisingly the lap times were less than a second slower than they were on Friday (which was intermediate conditions). I was still one of the quickest on Saturday so my extra practice seemed to have paid off.

Due to the lack of visibility with the spray, I decided to go out at the front. From a distance, I pushed to stay with the quick drivers. This seemed to work as I was setting what I thought was good lap times. I came into the pits expecting at least a top 5 starting position for tomorrows race. However, I was shocked to find out that I had only qualified P7. Crazily, I was less than 3 tenths off pole position and not much more than 2 tenths of 2nd position! The wet usually spreads out the gaps between all of the drivers but all this rain had done was brought us closer together! I could already tell that it was going to be a close day tomorrow.

After the qualifying results had been finalised we were shocked to find out the pole position starter had been disqualified for “outside assistance”. I was upset for him but I moved me up a place on the grid tomorrow.

Starting 6th, I was aiming for at least a top 5 finish and to try to lose the least amount of points possible towards my rivals. As the lights went out I initially had a good start. However, in the second phase, I either got a bunch of wheelspin or my clutch didn’t pick up. This caused me to fall down to P10 before I even got to turn 1. For the next 5 laps, my clutch was still slipping but I was still slowly working my way through the field.

On lap 3, I managed to get back into P7. I was still stuck behind someone that was being really over-aggressive and squeezing me onto the grass every time I tried to get past. I was still stuck behind them until the 7th lap where I sent it up the inside making sure to stay in front out of the corner. On the same lap, the original pole-sitter, who was coming through the field after being disqualified in qualifying and started from the back, passed me into the last corner. I stayed in P7 until the end. Once again, the original pole-sitter had gotten a penalty and fell down to 11th. This promoted me back into 6th place, meaning I didn’t lose any places in this race.

Before the second heat, there was a very large rain shower, causing the lower half of the circuit to be completely flooded. After an hour’s delay, the track was safe to race on and so we did. Between races, while we were waiting for the track to dry, we diagnosed and tried to fix my slipping clutch. We thought that it was just dirty and slightly worn so we cleaned and regreased it and went out for the next heat.

It hadn’t worked. At the start, I had a good reaction but still lost a couple of places. It was better but was still slipping until the 3rd lap. On the 2nd lap, the pole sitter was coming through the pack and I decided not to put up too much of a fight as it was only the second lap and we would have lost a lot of time to the karts in front. I also wanted to try to follow him through when he passes the karts in front. On the 4th lap, I overtook one of the two drivers that overtook me at the start. Two laps later, on lap 6, I once again, sent him up the inside getting back P7. This is where I finished and I also got the fastest lap of the race by just 0.001 seconds.

Once again, we tried to fix the clutch. We thought we fixed it so we decided to see if it was better and if it wasn’t then we would swap it for the final.

The track was almost completely dry for the third heat so the lap times were quicker than the previous heat’s. At the start, I found out that the clutch wasn’t fixed but I had learnt to defend the inside line to stop as many people from getting passed as possible. I didn’t lose any places on the first lap but on the second lap I left the door open and the kart behind had no hesitation and went straight up my inside, placing me into P8. On the next lap the original pole sitter went by us both so followed him passed the driver that got passed me the lap before and stayed in P8. On the 8th lap, the driver behind got past me once again and put me into 9th place.

I stayed here until the end of the race with a best lap of 53.59, over 5 tenths slower than the fastest lap of the race. I had quite a bad pace in this heat so I needed something to change for the final to be in contention for a top 5 finish.

Going into the final we knew that we had to do something about my clutch as if how I wouldn’t even finish in the top 8 never mind the top 5. Due to this, we borrowed a competitors clutch. This worked as when the lights went out to start the final I went like a rocket. Between races, the track had completely dried out and I knew that I had good pace in the dry. At turn 1 I lost a place after being held up by a driver in front. At the bottom half of the track, the leader got squeezed onto the grass putting him down to 15th and me back into 7th.

About a quarter of the lap later I was once again on the bumper of the next kart. I couldn’t get past however, as there was a backmarker in the way. I followed the kart in front passed the backmarker into the chicane. The move was done until I felt a kart hit my kart from the side, spinning me off of the track and putting me out of the race. I went from being the fastest man on track by four-tenths, to being out of the race. For the next 5 laps, I had to watch my competition driving around me…

I later found out that if I kept up the pace that I had i was lapping more that 5 tenths faster than the front 2. I could have overtaken P3 and easily caught up to the leaders with laps to spare. I would have had chance to get my first win in the CKC. (I don’t know how I haven’t won yet!) 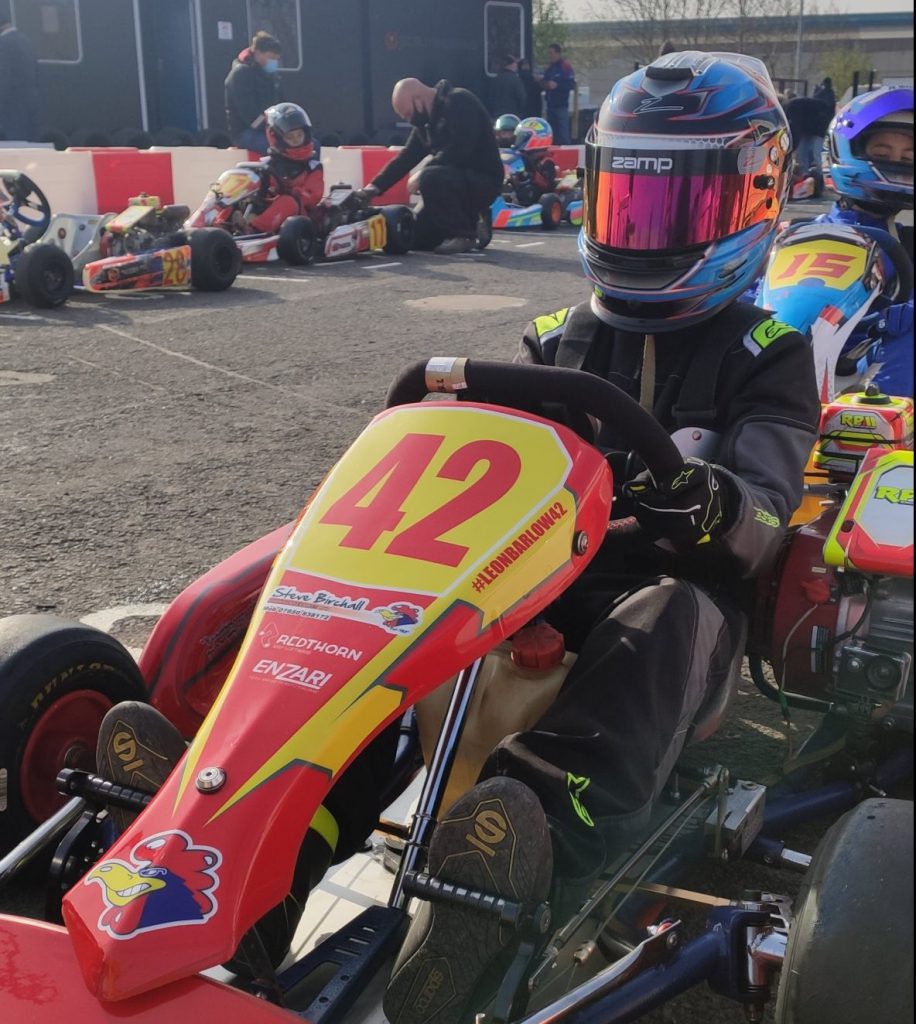 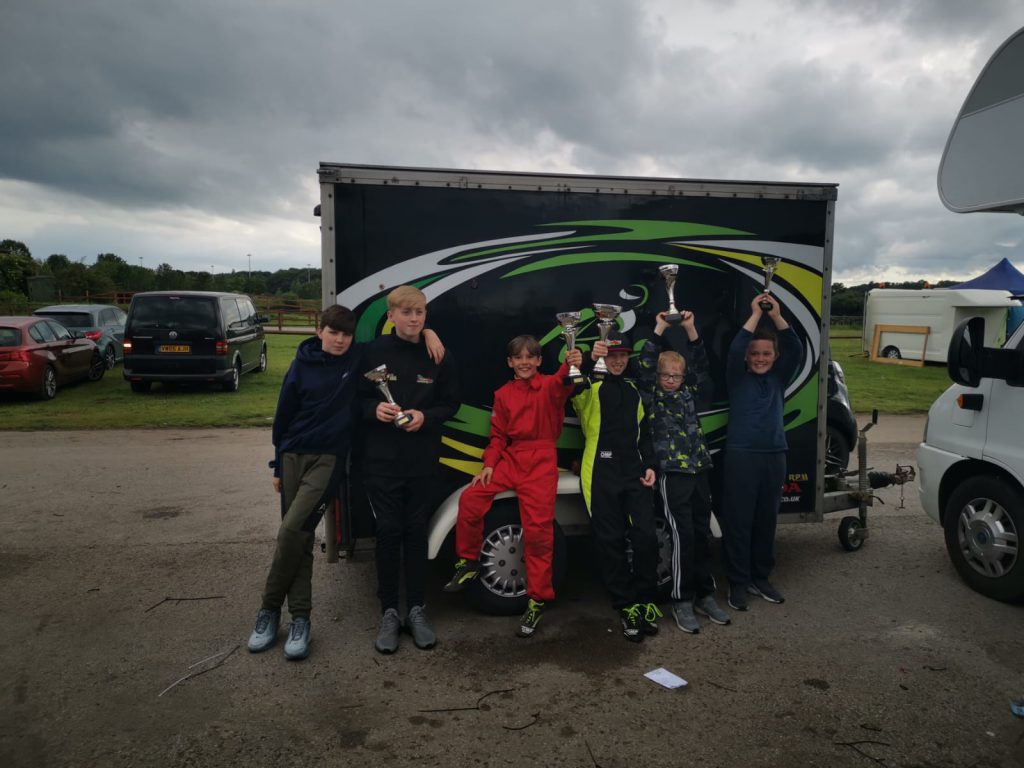